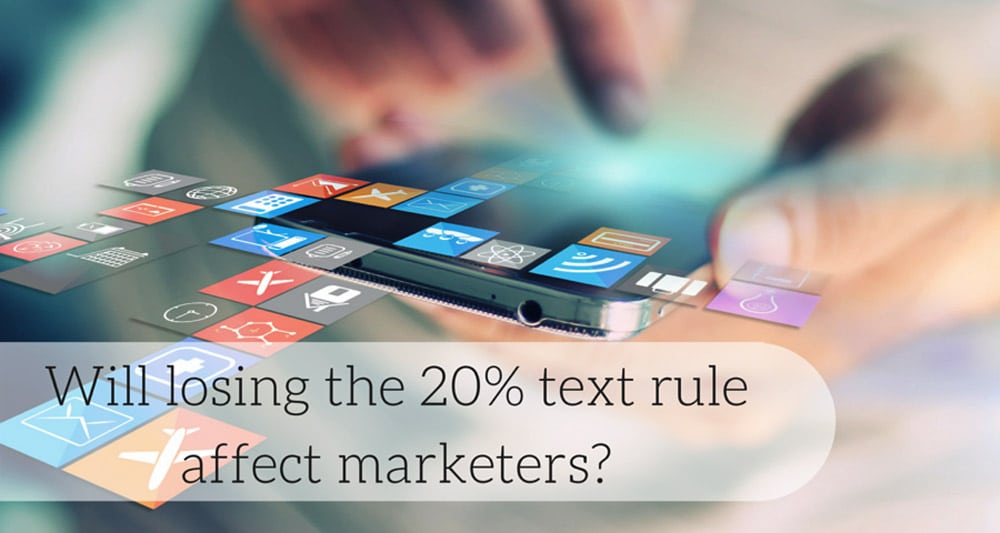 If you run a Facebook business page, you may have seen some buzz about Facebook changing it’s 20% text rule. For those who don’t know, the 20% text rule is Facebook’s guideline for how much text you can include in an image that is accompanying a promoted post. Up until now, Facebook would not accept promoted posts if the image contained more than 20% text. Currently, Facebook is testing a new way to control the density of text in ads.

Previously, marketers had a love/hate relationship with Facebook’s 20% text rule on ads and promoted posts. It made for a difficult approval process if text took up what was still considered a reasonable amount of space. However, compared to a system that limits the amount of views on an ad with high text density, it was much simpler to know that once your ad was approve, there were no barriers to getting impressions.

The new promoted posts system allows every ad to be accepted, but Facebook tells you whether or not it will reach anyone. There are four levels of “approval” that will now be used: ok, low, medium, and high. If the preferred image style is “ok”, your post has little to no text. This style will cost the least and will reach the most people. From here on up, the photo styles will get more and more expensive and will reach less and less people. So while your post can now contain an unlimited amount of text, it is not guaranteed to reach anyone. Searchinfluence.com provides a great guide for using text in images, regarding this new system.

Are you not seeing the new system on your business manager? That’s because it is in beta! Only select businesses are being chosen to see this new system. Jonloomer.com was able to contact a Facebook representative; they said that Facebook is implying this system in order to see if it will impact advertisers and that it is not being changed across the board at this time.

So what does this mean for marketers? Will this new Facebook system really have an impact on the way we market digital content? The only way to know this is through trying it out, so we give Facebook credit for doing this in beta!